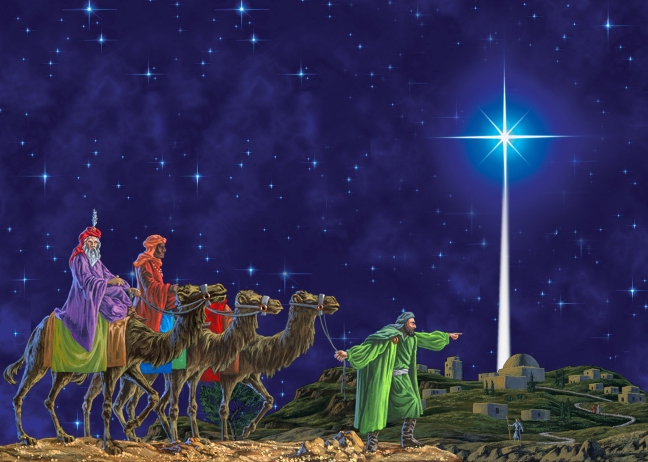 What is your favorite part of the Christmas nativity scene? Every now and then I come across a nativity with something missing, an animal or a key character of the story and it just seems odd because that is how I’ve always seen and pictured the scene.

There is one element of the biblical nativity that has captured my attention for decades, the star of the King. Every neighborhood Christmas scene I see as I drive down the street has a star hanging over the little wooden nativity. The star is only mentioned in the Gospel of Matthew chapter 2. However, this star is different; it is His star, the star of the King of the Jews. This star served at the pleasure of God and was created and directed by God. This star has one task to perform; guide the Magi from the east to the geographic location of the King of the Jews.

There are three basic theories of what this star was. Maybe it is the alignment of planets creating a very bright star-like appearance. Possibly, it could have been a comet that moved and pointed the direction for the Magi. Another theory supposes that the star was a visible manifestation of the glory of God as in the book of Exodus, the glory cloud by day and the fiery cloud by night. Whatever is was, God created it and the Magi saw it.

The other mystery surrounding the star is that the Magi understood that this star actually is the fulfillment of the prophecy of the coming King of the Jews, the Messiah. Magi are not Jewish. How did they come to understand the meaning of the star? Who told them? Who taught them? The Bible leaves those details in the category of mystery for now. One fact is sure; this star directed and guided the Magi to Jesus.

What is it that guides you to the King of the Jews? Sometimes it is a local church full of friends and joyful community. Other times it is a bundle of hard times with many tears or in the midst of disease or grief.  Whatever it is that guides you to the Savior, praise His Holy Name! The goal of the star is not to guide you to healing or long life. The goal of the star is to guide you to the Savior of your soul, the Forgiver of your sins, your King.

After the Magi found Jesus there is no mention of the star ever again. The Magi were told by God in a dream to return home by a different route and we never hear for them again. They went home to live and die with their families. But they had found the King. They had worshiped at His tiny feet. The science of studying the stars along with the understanding of the Old Testament led these Magi to see the star, His star.

It is true. Wise men still seek Him. Merry Christmas.

About life, preaching, church, books, and other stuff.